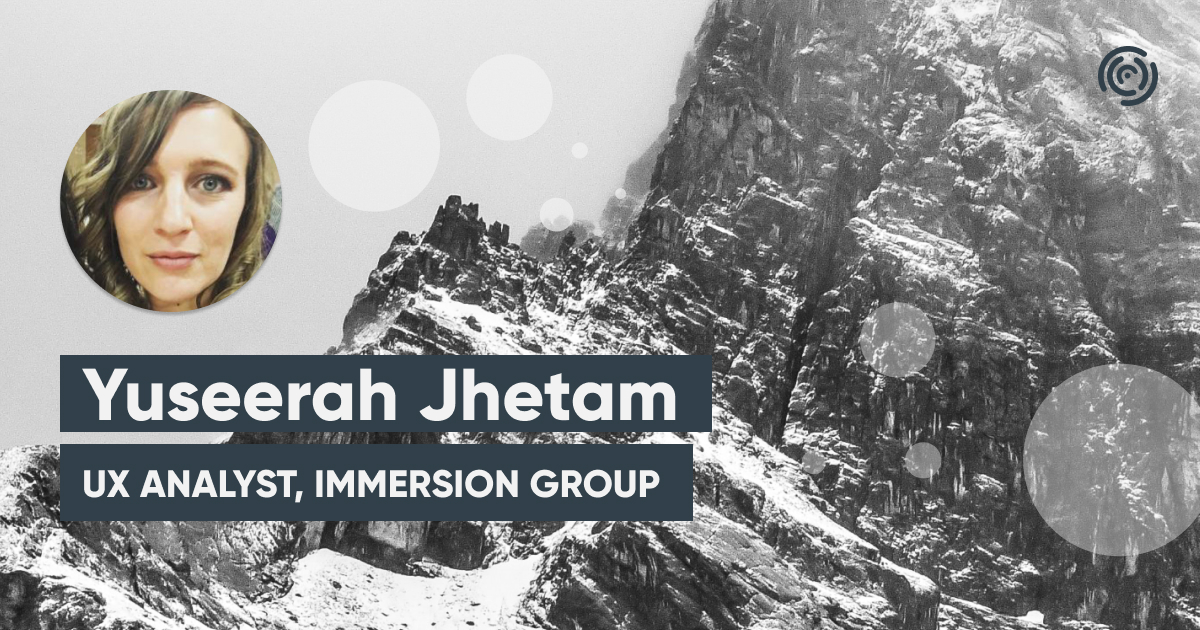 A journey of self-discovery, from sales to UX.

Tell us where and how your journey started?

In 2007, I found myself in a sales position and felt like I had hit my ceiling there. From 2007 to 2016, I never really found anything that actually interested me enough to pursue it further, so I just stayed in my comfort zone, and kept to sales. I explored different industries including procurement, health and safety, and even accounting.  But each time, I found myself in the same place, just not excited enough to study the field or to pursue I further. I was really starting to feel like I’d never have the chance to say “Wow, I love my job”, I just kept getting the feeling that this just isn’t me.

So after exploring these different industries, when did you finally discover the world of UX?

It wasn’t until late 2016 that a friend introduced me to a friend of theirs, that works in UX. We got to chatting about her work and what she does, and at first, I didn’t actually understand what she did for a living. It sounded a lot like graphic design, with a little bit of coding.  She came back to me a few days later and showed me a couple of her wireframes; and from there – I was completely hooked. The entire concept of UX suddenly clicked into place, and I thought, “Now this is something that I can definitely get excited about.”

Little did I know of the enormity of knowledge and skills development I was about to embark on.

So you finally found what excites you, what did you do next?

It was about month later that I signed up for my first user experience design course through the University of Cape Town. As a first timer, I had absolutely no idea what I was doing and what was going on, and at the time, my husband had a broken wrist so I was probably also a combination of tired and panic throughout the 6-week course. With absolute perseverance and many long nights, I passed the course, which further ignited my passion for UX and boosted my confidence ten-fold.

Wow, that is quite something – so you’ve shown your determination and passion for UX, how did you take this to the next level?

The hunting began! With my first course behind me and the fundamentals kick starting my career, I learnt that in order to become a fully-fledged UX designer, I needed to have a good portfolio. So, in order to do that, I needed to put together some dummy or practice work to illustrate what I’ve learned. I did so much research, and read so many articles and advice pieces, many saying to “fake it ‘til you make it” – well let me tell you; if you don’t know what you’re doing then faking it just isn’t going to help you.

So, I tried my hand at a few (terrible) dummy projects and quickly started receiving feedback from several companies and was also asked to complete and submit a few design challenges – yes! A foot in the door! I was so motivated and so excited to get started.

That is amazing! How did that go?

Well, it definitely came with its own challenges! At the time I was quite frustrated, but understandably so – but this didn’t set me back – I was determined to keep trying new approaches each time, using some of what I had learnt during the UCT UX course and some of what I had read online. All of which turned out to be unsuccessful.

Wow, what a journey so far! What did you do next?

After some time, an opportunity opened up at Immersion Group; then called Immersion UX. I was so excited about this opportunity but also so nervous. After so many rejections I was determined not to add this one to that list! I landed a first interview which was very daunting. I’d done my research, and these guys were really passionate and knowledgeable about UX. I didn’t know them personally, so I didn’t know what to expect.

When I first spoke to Reynhardt Uys, Chief Experience Officer of Immersion Group, I remember thinking that he has so much experience and so much knowledge of the industry and that I really just wanted the opportunity to learn from him and his team.

A few days later, I couldn’t believe my eyes when an email landed in my inbox from Immersion Group! A design challenge – a couple of hours later, we spoke again to review my submission – and to this day, I cannot remember a word they had said during my feedback session, because all I could remember was telling myself that it would be okay, I would get through this one, learn from it and keep trying! I knew without a doubt that this would not be my last stop – I would continue pursuing my career in UX, without giving up.

I didn’t make the cut.

Oh no – you really had us going on a HEA there! What did you do next?

I did what I promised myself I would do: I continued to study. I went to every UX-related meetup I could get to, I wanted to learn from others and meet as many people in the industry as I could. I wanted to make meaningful industry connections.

Sometime later – another position opened up at Immersion Group. I remember thinking to myself that this had to be a sign!

Armed with even more industry knowledge, more practice behind my belt and industry connections that I could lean on for guidance, I decided to try again.

I had a connection with Immersion Group that I can’t quite explain, a pull that I just needed to pursue. I knew that this is where I wanted to be. So I contacted Lydia again; Head of HR. I would definitely say I just about harassed her with non-stop emails! I kept sending email, after email, after email; I was not going to let this opportunity pass by without a chance at it.

Finally, the call came in – “…we’d love to meet with you!” I couldn’t believe this was happening! Not just a phone call, not just an online review – an in-person, physical meeting. This was my second chance! We met on a Friday, I sat down with Geoffrey Hardy, Head of Digital and with Reynhardt Uys. I was so nervous and so excited, not just to meet with them, but for this second chance opportunity to work at Immersion Group.

After the meeting I wasn’t quite sure what to think and by the next Tuesday I still hadn’t heard back from them. I had accepted that I most likely wouldn’t back hear from them, but then later that day, it all fell into place.

You got it! That is amazing, such an awesome achievement! So, now your UX career began, right?

Right! I was smiling so much my cheeks hurt – I got the job!

During this first year with Immersion Group, I’ve had the incredible opportunity to work with so many amazing and talented people. Together, we’ve been working on meaningful projects that have been so educational, inspiring and something I can now relate to so deeply.  The challenges have been endless, but all worth it. I cannot wait to see what the future holds for me in UX, and am thankful every day for the opportunities I’ve had and the incredible support, from both my husband and my Immersion Group family.

Yuseerah is a talented UX Analyst at Immersion Group with a passion for human-centred design solutions, helping to solve even the most complex of problems. By taking every opportunity to learn and discover, Yusserah explores the world of UX, refining her skills and her experience to produce meaningful experiences that positively impact human lives. The synergy she feels at Immersion Group has greatly afforded her the opportunity to grow as an individual and as a professional in the industry. And now with so many industry connections, knowledge and UX skills, Yuseerah is fast becoming known as a UX extraordinaire!

If you’re wanting to also launch or grow your UX or UI career, visit the careers section on www.immersiongroup.co.za for available positions and get in touch with us today!